DO Network uses a clever consensus algorithm that we call the Wave consensus protocol. Waves form in the ocean and gradually spread or cover the sea, so named because the process of consensus is very similar to an ocean wave.

How to quickly reach consensus among 499 legal nodes is the sole purpose of the Wave agreement. We hope that one leader or several groups of leaders with higher interests will not control this process of consensus all the time. We prefer that all nodes that meet the data state requirements have the same opportunity to do the necessary work for the consensual process. The benefits of this are security and decentralization sufficiently. We can think of 499 nodes as independent leaders. Any leader in the network is qualified to initiate data consensus. In other words, users can identify these leaders and have package blocks qualification.

During building consensus for blocks, we first pass a random sampling. Extract nodes whose data status meets the conditions from the network verification pool and ask whether the block data is correct. In this process, we will not use multi-loop single feedback inquiry judgment. We will confirm in one sample that nodes must fully agree and tell the leader that the block data is legitimate. If one node in a sample does not approve, the block will not complete the final consensus. The above process has the advantage of being safer while creating new drawbacks. The strictness of exceptions increases the likelihood that blocks will not be a consensus.

DO Network hopes that more blocks can be legally confirmed in the high TPS state, so we will conduct 5 to 6 random extraction from the verification pool at the same time, which will generate a1 group, a2 group, a3 group, a4 group, a5 group, and a6 group to vote for the block initiated by the leader. In six samples if a3 group of high calculation efficiency, the earliest leaders feedback the vote outcome, the process is the flow of sub-second. The a3 will add a set of nodes’ work count once leaders receive the earliest feedback information data, and they will be through the node list to the entire network broadcasting. All leader nodes of the block data conduct final validation and complete the entire network consensus.

When 60% of the leaders of the whole network have established a consensus on the legalized block, it will be finally confirmed on the chain, and we estimate the time of this process is to be 1-2 seconds. 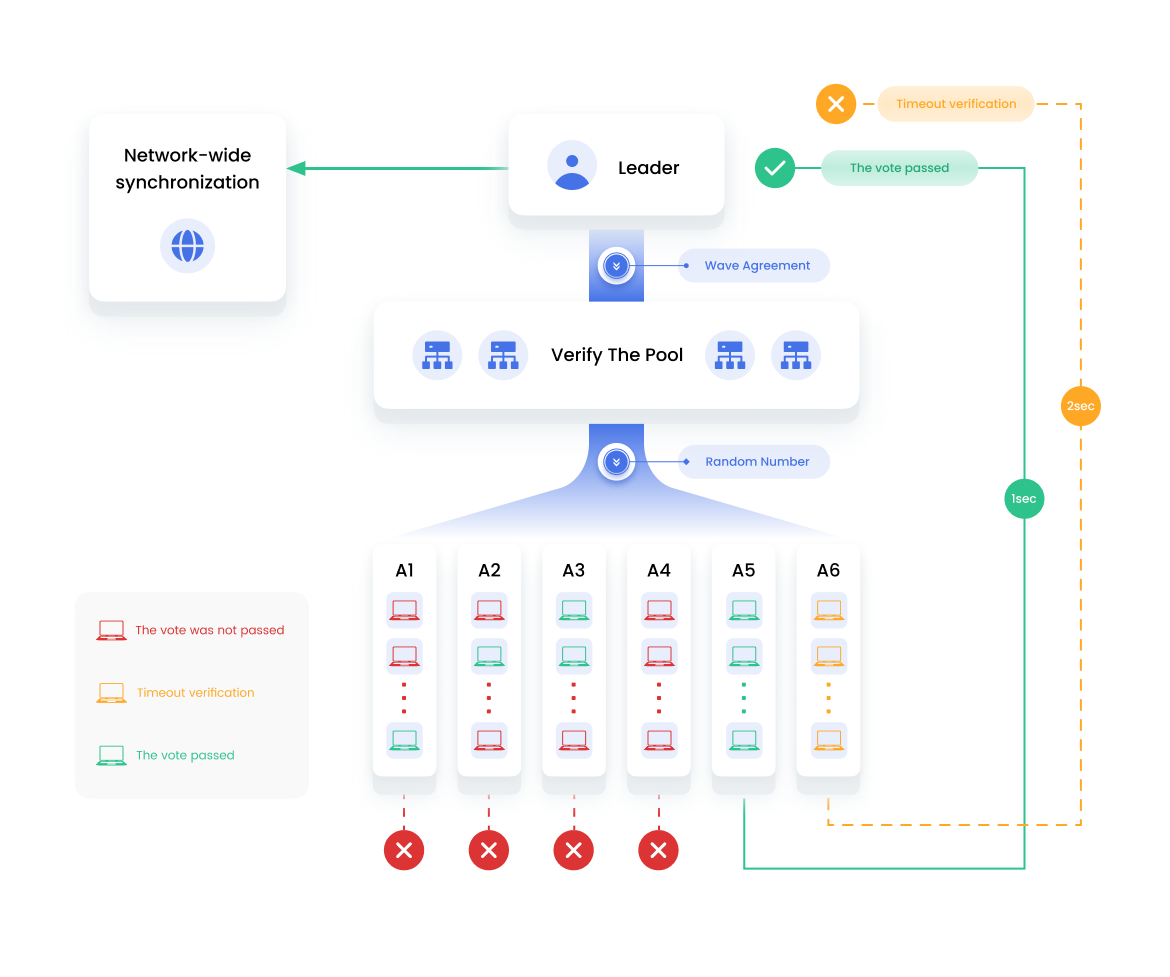 The Wave Consensus protocol provides excellent performance for DO Network, which enables the whole network from local to the entire network to be quickly pushed by the waves, and use the lightweight algorithm to safely and efficiently complete the consensus of the whole network.